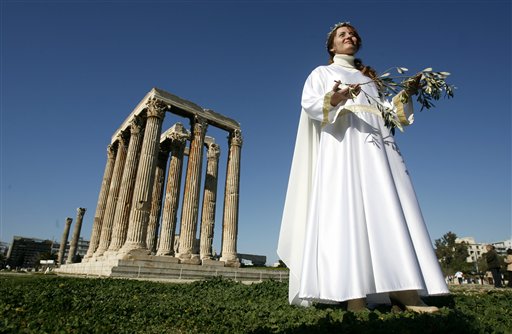 Ellinais only formed a short while ago, and already it is making international headlines:

(AP) A clutch of modern pagans honored Zeus at a 1,800-year-old temple in the heart of Athens on Sunday, the first known ceremony of its kind held there since the ancient Greek religion was outlawed..."We are Greeks and we demand from the government the right to use our temples," said high priestess Doreta Peppa...Ellinais was founded last year and has 34 official members, mainly academics, lawyers and other professionals...Unlike the monotheistic religions...the old religion lacked written ethical guidelines, but its gods were said to strike down mortals who displayed excessive pride or "hubris", a recurring theme in the tragedies of Euripides and other ancient writers...

The Wild Hunt has a good post with more links.

One of the high priests said:

"...We do not believe in dogmas and decrees, as the other religions do. We believe in freedom of thought..."

How refreshing. Thanx to Witchvox for this item
Posted by genexs at 8:15 PM

the antikythera that was rebuilt is wrong.the original was rebuilt for greece in 1911 by Germania.it was tested and working where you can see the day as night.the original is very powerful and belongs in the acropollis.the acr\poLLIS is the center of the acre tis pollis tis athenas.a cirle between now visoko sun pyramid(aka:lyrria)amphion(story of twins)reveals 12 temples of mythology.