We don't believe, we dance! 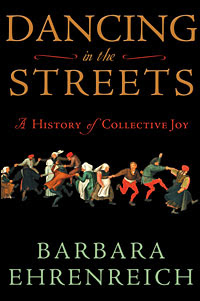 An Academic View on the Right to Party

This would be something great to get a PhD in. Damn, I was a double major in college and never knew it:

From ancient Greek Bacchanalias and Roman Saturnalias to tailgating and Mardi Gras, we humans like to party. Throughout history, public revelry has had its critics. The Victorian world saw it as vulgar pageantry, the stuff of "savages" and the underclass. The academic world, for the most part, ignored it. Author and activist Barbara Ehrenreich...gives a history lesson on collective joy and explains why humanity engages in large, ceremonial celebrations and why the upper classes have tried — and often still try — to suppress it.

The link above is an interview with the author of the book, Dancing in the Streets: A History of Collective Joy. You will also finda a lengthy excerpt:

So when the phenomenon of collective ecstasy entered the colonialist European mind, it was stained with feelings of hostility, contempt, and fear. Group ecstasy was something "others" experienced — savages or lower-class Europeans. In fact, the capacity for abandonment, for self-loss in the rhythms and emotions of the group, was a defining feature of "savagery" or otherness generally, signaling some fatal weakness of mind. As horrified witnesses of ecstatic ritual. Europeans may have learned very little about the peoples they visited (and often destroyed in the process) — their deities and traditions, their cultures and worldview. But they did learn, or imaginatively construct, something centrally important about themselves: that the essence of the Western mind, and particularly the Western male, upper-class mind, was its ability to resist the contagious rhythm of the drums, to wall itself up in a fortress of ego and rationality against the seductive wildness of the world...

There's always someone trying to spoil the party! But, YIPPIE!, science comes to the rescue:

With the rise of the social sciences, and especially the anthropology of the 1930s and thereafter, Westerners began to view the ecstatic practices of non-Westerners in an ostensibly more open-minded way...Westerners had to concede that the ecstatic behavior found in traditional cultures was not the hallmark of savage "otherness" but the expression of a capacity that may exist...in all of us. By the 1930s, anthropologists had begun to think of the rituals of small-scale societies as functional, meaning in some sense rational.

So, dancing with wild abandon was a sensible and rational act. Just as I always suspected.

Humans are social animals, and rituals, ecstatic or otherwise, could be an expression of this sociality, a way of renewing the bonds that held a community together. In the functionalist anthropology that reached full bloom in the 1940s and '50s, many of the formerly bizarre-seeming activities of native peoples were explained in this way: as mechanisms for achieving cohesiveness and generating feelings of unity. Americans tried to achieve the same thing through patriotic and religious rituals; the "natives" simply had a different approach. But right up to our own time, even the most scientific and sympathetic observers have tended to view the ecstatic rituals of non-Western cultures with deep misgivings...

I think today there's a bit of that going on, in the current Science VS Religion wars. Some well intentioned people are forgetting we are social animals. A good number of people can find a higher meaning in science. You even can teach that! But for others, the wonders of the Cosmos are nice, yet not a source of deeper meaning. But most sure love a good party! Then again, there's always someone who wants to throw Holy water on us and pray for our souls.

(from the good folks @ Witchvox)
Posted by genexs at 8:03 PM

Rock concerts are the Bacchanalia of our time.