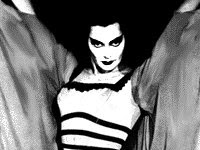 Another beautiful spirit has crossed the bridge to SummerIsle:

...But for TV viewers, she will always be known as Lily Munster in the 1964-1966 slapstick horror-movie spoof "The Munsters." The series (the name allegedly derived from "fun-monsters") offered a gallery of Universal Pictures grotesques, including Dracula and Frankenstein's monster, in a cobwebbed gothic setting. Lily, vampire-like in a black gown, presided over the faux scary household and was a rock for her gentle but often bumbling husband, Herman, played by 6-foot-5-inch character actor Fred Gwynne (decked out as the Frankenstein monster)...At the series' end, De Carlo commented: "It meant security. It gave me a new, young audience I wouldn't have had otherwise. It made me 'hot' again, which I wasn't for a while."

Yes, she was HOT! She imprinted the sex drives of legions of the alternative set. She was a real "role model", for everyone who rejected the mundane. She was sexy, had a cool house, kept spiders and bats, liked to come out at night, and drank blood. What more could one want?

Universal Pictures exploited her slightly exotic looks and a shape that looked ideal in a harem dress in such "sex-and-sand" programmers as "Song of Scheherazade," "Slave Girl," "Casbah" and "Desert Hawk."

"Slave Girl"? Whoowhoo! Heh, sorry, it's not what the title first promises. It's more a camp, screw-ball comedy sort of thing.

Thank you so much for everything, Yvonne.
Posted by genexs at 9:16 PM