Vacation in the Stupid Zone! 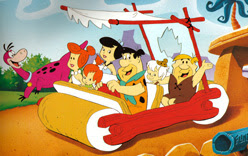 27 Million! For this nonsence! Why am I not buying this? It's obviously an intelectual and scientific swindle, but something tells me even more is going on:

...which also includes a planetarium, a special-effects theater, nature trails and a small lake, is privately funded by people who believe the Bible's first book, Genesis, is literally true...For them, a museum showing Christian schoolchildren and skeptics alike how the earth, animals, dinosaurs and humans were created in a six-day period about 6,000 years ago...While foreign media and science critics have mostly come to snigger at exhibits explaining how baby dinosaurs fit on Noah's Ark and Cain married his sister to people the earth, museum spokesman and vice-president Mark Looy said the coverage has done nothing but drum up more interest.

Looy? Sure there's not an "n" missing in there somewhere?

Damn-- I mocked him! I trust my check's in the mail. Hey, at least I deserve free tickets on the dino-merry-go-round.

...Besides, U.S. media have been more respectful, mindful perhaps of a 2006 Gallup Poll showing almost half of Americans believe that humans did not evolve, but were created by God in their present form within the last 10,000 years...

Thanx for reminding us. The lion's share of the blame rests with the media for that humiliating factoid. As a further example of their incompetence, they consistently fail to mention there's virtually no dispute among scientists on the basics of evolution. But I suppose such info just get's in the way of a balanced view. It's so nice to watch the media jump through hoops held by the tinfoil-hat crowd.

Looy said supporters of the museum include evangelical Christians, Orthodox Jews and conservative Catholics, as well as the local Republican congressman, Geoff Davis...

TO ALL MY ATHEIST AND AGNOSTIC FRIENDS: please note this atrocity is untouched by Pagan/Wiccan hands. :)

Ham, who also runs a Christian broadcasting and publishing venture...

Sounds like a Mom & Pop operation, doesn't it? And in the quest for this "balance", how'bout some biographical info on Ham's Fundie-Absolutist empire? I'm sure all his books, tapes, and DVD's will be on sale in the Museum Shop.

The museum's team of Christian designers include theme park art director Patrick Marsh, who designed the "Jaws" and "King Kong" attractions at Universal Studios in Florida, as well as dozens of young artists whose conviction drives their work.

OK, so people working on this are FX people from theme parks. It's good to know that no real scientists, working in real museums, had anything to do with this.

"...I think a lot of people are going to come out of curiosity ... and we're going to present the Gospel. This is going to be an evangelistic center," Looy said. A chaplain has been hired for museum-goers in need of spiritual guidance...

Yup, the sight of a trilobite puts the fear of God in me! Whenever I go in a museum, I suffer a bowl-shaking crisis of faith. Hold me, Lord--hold me! For comfort, I'll read The Counter Creationism Handbook.
Posted by genexs at 8:46 PM