Father George V. Coyne, director of the Vatican Observatory, is presenting a lecture entitled “Science Does Not Need God, or Does It? A Catholic Scientist Looks at Evolution”. Advance copies of his talk have been made available:

"...He calls “mistaken” the belief that the Bible should be used “as a source of scientific knowledge,” which then serves to “unduly complicate the debate over evolution.”...

Father Coyne goes on to point out the work of Christian theologians of the past, who advocated a great age for the earth. In addition...

...He points to the “marvelous intuition” of Roman Catholic Cardinal John Henry Newman who said in 1868, “the theory of Darwin, true or not, is not necessarily atheistic; on the contrary, it may simply be suggesting a larger idea of divine providence and skill...” Pope John Paul Paul II, he adds, told the Pontifical Academy of Sciences in 1996 that “new scientific knowledge has led us to the conclusion that the theory of evolution is no longer a mere hypothesis...”
Posted by genexs at 8:04 PM No comments: Links to this post 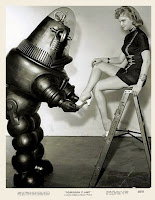 Bebe Barron, the female half of the musical team that composed the groundbreaking music score for the classic Science Fiction film "Forbidden Planet", has died:

...Bebe Barron, who with her husband Louis composed the first electronic score for a feature film — the eerie gulps and burbles, echoes and weeeoooos that accentuated invisible monsters and robotic creatures in the 1956 science-fiction classic “Forbidden Planet” — died Sunday in Los Angeles...


Yes, and this was long before digital FX. In other words, they did it all with "vacuum tubes and tape recorders".

(Image: RobotPorn)
Posted by genexs at 11:09 PM No comments: Links to this post

Humming Praises for the Wild Bee


Great article about wild bees and encouraging them to take up residence in your garden:

...There are a few basic tenets for the bee gardener to keep in mind: First, limit the use of pesticides, or stop using them altogether. That includes spraying the lawn with herbicides.
Provide a source of water and clay because mason bees build their nests with mud...Some native bees seek out patches of bare ground, especially sandy banks that face south or east, where they can get sun. Others will nest in standing snags or dead trees, if the bark is removed...

In the article there's a good link to the Xerces society, which has a good 'how to' PDF for building simple homes for native solitary bees:

...To make houses for mason bees, drill holes of different sizes in a block of wood...Bumblebee boxes are a bit more complicated: they resemble bird houses, but with a smaller hole, and are filled with some kind of nesting material, like cotton batting...

All making a nest requires for some of these bees is a block of wood and a drill. The direct link to the publication is Nests for Native Bees.
Posted by genexs at 8:24 PM No comments: Links to this post

Hypatia's words to live by

Jason over at WildHunt points us to a great article about Hypatia in a Australian zine. There's a great quote from Hypatia in it:

"Reserve your right to think, for even to think wrongly is better than not to think at all,"


That pretty much sums up the difference between pagan spirituality and the 'faith based' world of the Abrahamic religions. It's bad enough there's religions that claims that thinking is a bad thing, but worse yet is that they claim you'll be punished for thinking wrongly! Oh, now I get it. Best not to think at all and avoid the risk. Faith based religions are just so ready for the dust bin.

The article, by Jane Baker, is entitled "Webs, Weeds & Wisdom: Reserve your right to think" It's an excellent article, but what I love most is her intro to her discussion on Hypatia:

"...Let me tell you about someone who should shine as a beacon for truth down the centuries from way back in the early fifth century AD. Her name was Hypatia..."

I'm going to leave it there. Please do yourself a favor and read Jane's article. Like other Neo-Pagans, I believe we are seeing the rise of Hypatia to becoming something of Patron Saint for us. Now that there's a movie coming out about her, it sure seems the God and Goddess wish to bring her alive in our minds again.
Posted by genexs at 2:13 PM No comments: Links to this post

Cheers to the planet

For this Earth Day, a beer inspired by Carl Sagan's 'Pale Blue Dot':

...Hair of the Dog owner and brewer Alan Sprints is “trying to get people to think globally and drink locally,” with his Earth Day public sale at the brewery. The sale celebrates the first release of Blue Dot each spring. Blue Dot, an imperial IPA made with 98 percent organic ingredients, was named for Carl Sagan’s description of this planet, “in order to bring more awareness to the Earth,” Sprints says...

"IPA" stands for 'India Pale Ale', a style of English ale with an assertive addition of hops.
Posted by genexs at 8:30 PM No comments: Links to this post

Gauging a Collider’s Odds of Creating a Black Hole

Could the earth be destroyed by a physics experiment in a particle collider? It's a scenario played-out in a number of science fiction stories:

...In a paper published in 2000 with the title “Might a Laboratory Experiment Destroy Planet Earth?” Francesco Calogero, a nuclear physicist at the University of Rome and co-winner of the 1995 Nobel Peace Prize...deplored a tendency among his colleagues to promulgate a “leave it to the experts” attitude. Fears about the Brookhaven collider first centered on black holes but soon shifted to the danger posed by weird hypothetical particles, strangelets, that critics said could transform the Earth almost instantly into a dead, dense lump...

Kinda reminds me of the last episode of The Lexx.

(image: stardestroyer )
Posted by genexs at 7:35 PM No comments: Links to this post

John A. Wheeler, Physicist Who Coined the Term ‘Black Hole,’ Is Dead at 96

An amazing obit about the scientist John A Wheeler. Please take the time to read about this fascinating fellow, but here are some highlights:

...Among Dr. Wheeler’s students was Richard Feynman of the California Institute of Technology...Another was Hugh Everett, whose Ph.D. thesis under Dr. Wheeler on quantum mechanics envisioned parallel alternate universes endlessly branching and splitting apart — a notion that Dr. Wheeler called “Many Worlds” and which has become a favorite of many cosmologists as well as science fiction writers...

...At a conference in New York in 1967, Dr. Wheeler, seizing on a suggestion shouted from the audience, hit on the name “black hole” to dramatize this dire possibility for a star and for physics...The black hole “teaches us that space can be crumpled like a piece of paper into an infinitesimal dot, that time can be extinguished like a blown-out flame, and that the laws of physics that we regard as ‘sacred,’ as immutable, are anything but...”

...he sailed to Copenhagen to work with Bohr, the godfather of the quantum revolution, which had shaken modern science with paradoxical statements about the nature of reality. “...You can talk about people like Buddha, Jesus, Moses, Confucius, but the thing that convinced me that such people existed were the conversations with Bohr,” Dr. Wheeler said...

Posted by genexs at 7:44 PM No comments: Links to this post

Here's a follow-up to story to my post about the Salem Panel:

...Throughout the evening, the panelists described a mainstreaming of their religion that they never dreamed possible. Today modern paganism is the 19th most popular religion in the United States, said Adler...Nial Hartnett, a witch who lives in Danvers, wondered if this growing acceptance is a good thing, "...I wonder if we are in danger of losing who we really are, the mystery and the magic," he said...But Hildebrand insisted that the freedoms gained to practice their religion will be lost unless they work within some official structures, like the federal government. Adler agreed the community is not "as edgy" as when she began practicing 35 years ago. "There are compromises one makes," she said. "There are gains and there are losses..."

As pointed out in the recent Pew survey on religion in the USA, our numbers are growing rapidly and we are now approximately 1.4 million strong. So, it looks like we are going to be 'mainstreamed' whether we like it or not.

"...Wicca has exploded as far as numbers," said Hildebrand...There are now Wiccan-based charities, Wiccan-based AA chapters and Wiccan groups adopting highway beautification projects. Pagan studies courses are offered in major universities...In spite of the gains, Hildebrand mentioned she still gets calls from parents in custody disputes where religion is presented as an issue, and from workers afraid of coming-out-of-the-broom-closet for fear of losing jobs...
Posted by genexs at 10:23 AM No comments: Links to this post

The Wiccan way: No Place for Hate Committee to host panel discussion

Panel discussion on Wicca in Salem co-hosted by Margo Adler:

Salem - The city of Salem’s No Place for Hate Committee will host a panel discussion on April 12 that will focus on practices within the Wiccan faith and the everyday lifestyles of those practicing paganism. Margo Adler (author of "Drawing Down the Moon) will be cohosting a panel discussion on Wicca in Salem...The objective of the event is to inform those in attendance about the religion, lifestyle and culture of those who practice Wicca while also touching on the history and its distinction within the Salem community...

A number of important Wiccan people will be there. Such forms of outreach are very important, as certain groups of people still perpetrate disinformation about Wicca. I'm having a good discussion about Wicca with some Atheists over at MoJoey's blog, in the comments section.
Posted by genexs at 9:44 AM 2 comments: Links to this post

Darn! I missed it:

...A group of Salem, Mass., rodent enthusiasts have marked World Rat Day with a gathering that included rat beauty contests...
Posted by genexs at 9:23 PM No comments: Links to this post

Coprolites of the Gods

The exact date when humans first entered the Americas has been a long running controversy in archeology. Now, there's some new evidence pushing the date back to at least 14,000 years before the present:

...Exploring Paisley Caves in the Cascade Range of Oregon, archaeologists have found a scattering of human coprolites, or fossil feces. The specimens preserved 14,000-year-old human protein and DNA, which the discoverers said was the strongest evidence yet of the earliest people living in North America...Other archaeologists agreed that the findings established more firmly than before the presence of people on the continent at least 1,000 years before the well-known Clovis people...

The Clovis people existed between 12,000 and 13,000 years ago. For many years, this was the excepted date of North American colonization.

...Michael R. Waters, an archaeologist at Texas A&M University who was not part of the team, said, “Paisley Caves adds to the growing body of archaeological evidence that people were here prior to Clovis...

Fossil doody to the rescue!
Posted by genexs at 8:57 AM No comments: Links to this post