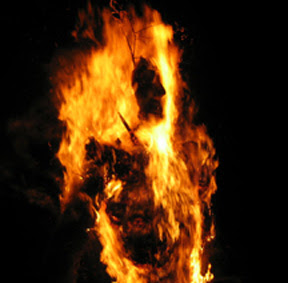 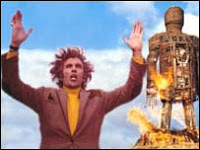 Long ago, Wiccans and Pagans figured out what to do with straw men. During the Sabbaths of Midsummer or Lugh, many of us construct a Wicker Man. John Johnston, a columnist for the Milford Daily News, hits all the right buttons:

...In debate or argument, one can set up a straw man, and invest him with great evil. Then, you can knock him down without difficulty or engaging in a serious exchange of ideas. A straw man is an easy target and provides a cheap victory...A red herring is an idea or argument that one can advance then rip apart with ease. In politics, straw men and red herrings are used to divert voters from issues of real importance. The Republicans have dominated Congress for 12 years with a basket full of stinking red herrings such as stem cell research, abortion, creationism and intelligent design, evolution, gay marriage, and other nonsense that does not impact the vast majority of our lives although these issues created by the far right can set back the course of civilization.

....Creationism, intelligent design, and a denying of the fact of evolution sets back health, the state of science, and undermines American education. The fundamentalists would make the United States the most backward nation in the western world...Nobody should suffer a loss of rights through the prejudice of the majority...The majority has no right to dictate the lifestyle of the minority... We are paying the price of elevating a truly fundamentalist thinking man to the world's most powerful position...Bush does not understand the theology of Islam. He does not, nor will he ever understand the people of the Middle East...

(A great book to the history of US relations with the Middle East is Power, Faith, and Fantasy: America in the Middle East, 1776 to the Present by Michael B. Oren.)

...In 2008, let's select somebody who is smart to the office of the president. Let's not embrace people who toss out red herrings and fight straw men to distract votes from real issues. Let's elect a president who lives in the real world in 2008, someone who knows the real world embraces the whole planet, a president with a real appreciation for the individual differences of the people of this world.

So true. There's great debates in the science Vs religion controversy. Questions of the existence of an afterlife, psychic phenomena, does God/dess exist, are so interesting and important. We can learn so much about ourselves, our place in the Cosmos, and our institutions, by having this discussion. But a good portion of the people on the "other" side of this debate are not interested is solving the mysteries of the Cosmos. As discussed by Darksyde in the post , Kansas Creationists: Down But Not Out, over at DailyKos:

...It's easy to get lost in the scientific or religious discussion, but this isn't about evolution or science or even religion. It's just another right-wing funded attack on behalf of the mega-rich, cleverly packaged to appeal to the very working families whose future it will devastate. The real goal is to undermine confidence in public education, maybe ultimately replacing those institutions with privatized versions (No doubt run by a recently acquired subsidiary of Neoconia Inc., suckling at the taxpayer teat). And it's about eliminating property taxes on sprawling McMansions...

In other words, they have bigger fish to fry. The ultimate goal of the Fundamentalist & Authoritarian cabal is mutating the USA into a repressive, Theocratic state.