On the much publicized "Obama" infomercial tonight, Michelle Obama revealed that her husband read the Harry Potter series to their daughter! Woowhoo!

I'm sure there's thousands of Dominionists coughing up blood at this moment.
Posted by genexs at 7:42 PM 2 comments: Links to this post

Critters of the Night

A Taste for Blood

Great article about creatures that survive by drinking blood and a recent book ("Dark Banquet") by Bill Shutt. It starts in the office of a friend of mine, Lou Sorkin:

...With his soft voice and friar’s manner, Louis Sorkin hardly seems the type to flout the sensible advice of a nursery rhyme. Yet on a recent afternoon at the American Museum of Natural History, Mr. Sorkin, a renowned entomologist, did precisely, luridly that...He took a glass jar swarming with thousands of hungry specimens of Cimex lectularius, better known as bedbugs. The small, roachy-looking bloodsuckers have been spreading through the nation’s homes and hotels at such a hyperventilated pace that by next year they are expected to displace cockroaches and termites as America’s leading domestic pest insect. To better understand their habits, Mr. Sorkin has cultivated a personal bedbug colony — very personal...

Lou keeps a jar full of bedbugs that he feeds with his own bug. As described in the article, the jar is capped with a fine meshed screen fine enough to keep the infects entrapped, but open enough to allow them to poke their beaks through to feed. Lou, being a dedicated entomologist offers them his arm.

Shutt points out features that blood drinking organisms have in common:

...the hatpin teeth, the natural clot busters and pain deadeners...Blood feeders must also be stealthy and wily and good at escaping the swats and fury of their often much larger hosts...

As blood is a poor source of nutrition, most vampiric animals are arthropods, who can subsist on small meals.

There's a lot on the famous and legendary vampire bats in the article, but perhaps the most nightmarish beast is the Candiru fish of the Amazon. If you're visiting the Amazon--whatever you do--don't pee in a stream:

...The only other vertebrates known to subsist solely on blood are certain types of candiru, a poorly studied but floridly feared group of inchlong catfish found in the Amazon and Orinoco Rivers. A hematophagous candiru’s usual modus is to parasitize a larger catfish, infiltrating the host’s gill slits, grasping onto the flesh inside, rupturing blood vessels, pumping out the blood with its highly mobile jaws and then, after a minute or two, darting out again. Yet for at least a century, the fish have been reputed to target the human urethra as well, supposedly enticed by the scent of urine: fish, after all, urinate through their gills. Despite the antiquity and persistence of the legend, there is only one confirmed case, from 1997, of a candiru making its way into a human urethra, where it probably had no time for a blood meal before suffocating to death...

(Image: Temple of the Fluke Man)
Posted by genexs at 8:18 PM 8 comments: Links to this post

Online auction sites have become primary facilitators of the illegal trade in endangered animals and products derived from them. Ebay has now put the brakes on that:

...In response to growing pressure from international law enforcement agencies and conservation groups, eBay, the online auction giant, announced Monday that it would ban all commerce in ivory, including most heirlooms, to avoid providing a market that will encourage the slaughter of endangered elephants...

Congrats go to the International fund for Animal Welfare. From the IFAW website:

...IFAW applauds eBay’s decision to institute a global ban on the sale of elephant ivory products by 1 January 2009 and calls on all other internet traders to follow their example...Announced just hours before the release of IFAW’s latest investigative report - "Killing with Keystrokes" - showing Internet trade in wildlife poses a significant and immediate threat to the survival of elephants, this decision is a very important step to help protect them. eBay has set the standard for protecting elephants, now governments and other online dealers need to follow their example...

Most polytheists (Wiccans, NeoPagans, and the whole unwashed mess of us) like to believe ourselves to be tolerant and accepting of other religions or spiritual beliefs (or non-beliefs). It's the monotheists who are cranky, strident, and intolerant---RIGHT?

Well, not exactly. Hinduism is the worlds largest polytheistic religion. But there's been a growing--and very troubling--thread of intolerance developing in India. The NY Times has a frightening article documenting violence and threats directed toward non-Hindus. As an example, one Christian family was terrorized by a crowd that would make the Spanish Inquisition proud:

...They were ordered to get on their knees and bow before the portrait of a Hindu preacher. They were told to turn over their Bibles, hymnals and the two brightly colored calendar images of Christ that hung on their wall. Then, Mr. Digal, 45, a Christian since childhood, was forced to watch his Hindu neighbors set the items on fire...(Mr. Digal was told)‘Embrace Hinduism, and your house will not be demolished,’...

Yikes. The sad thing is, that no matter what we believe, humans are the same all over.
Posted by genexs at 8:38 PM 3 comments: Links to this post

Hitchens comes out for Obama!

Vote for Obama: McCain lacks the character and temperament to be president. And Palin is simply a disgrace.

This article by Christopher Hitchens has gotten wide coverage, but since I've taken issue with this iconoclastic atheist's opinions a number of times, I think I owe this to him. It's wonderful to see such a great writer cut about a dozen new arseholes into the McCain/Palin ticket:

...The most insulting thing that a politician can do is to compel you to ask yourself: "What does he take me for?" Precisely this question is provoked by the selection of Gov. Sarah Palin...

I don't want to quote any more, as that will dilute this enjoyable acid tongued critique of all things McCain. I wonder what the NeoCons are thinking of Hitchens these days?
Posted by genexs at 8:21 PM No comments: Links to this post

Jason over at wild hunt outdoes himself again. Sarah Palin is indeed more of a nightmare than any of us can conceive. Mary Glazier is another mover and shaker in Palin's Dominionist cult:

...Glazier and her prayer warriors claim to have made God blind and give cancer to a Wiccan chaplain. Is this anything but the most malefic of magic? Any Pagan who proudly claimed to have given a Christian cancer, or put out one of the eyes of a Christian, would be rightly shunned and rebuked. Within this community of extremist Christians Glazier and her fellow prayer warriors are lauded as heroes, holy warriors striking a blow against Satan and the "Queen of Heaven"...

Consider the fact that Palin's rallies now resemble hate-fests. As I've said before, I think that behind the Stepford-wife/cheerleader mask lurks a hungry monster eager to absorb more power.
Posted by genexs at 6:24 PM 4 comments: Links to this post

Getting back to things...

Hi friends. Sorry my posting has been a bit erratic the last few weeks. Been swamped at work and had to prepare for a whip show. But things should be calming down now.
Posted by genexs at 5:43 PM No comments: Links to this post

Nice trophy for the VP's office 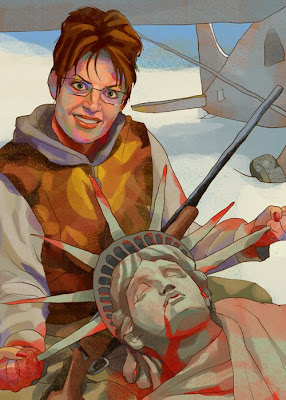 Don't cry, Soccer Moms. Pull yourself up by your dumdibbly bootraps. This team of mavericks will keep that persnickety government outta your way --wink--. That meanie Joe O'Biden just wants to take our sixpacks away--or worse--tax'em more! But change is a-commin...

(Great artwork by artist Zina Saunders via Blue Gal.)
Posted by genexs at 11:40 AM 2 comments: Links to this post