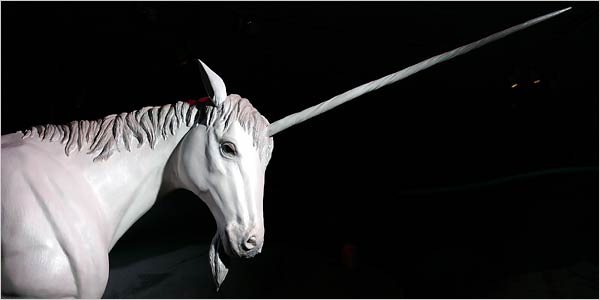 Exploring the Nature of the Unnatural
A great exhibit at the AMNH in NYC, “Mythic Creatures: Dragons, Unicorns & Mermaids” will open tomorrow and run through Jan. 6 at the American Museum of Natural History, Central Park West and 79th Street; (212) 769-5100 or amnh.org. From the NYTimes article by Edward Rothstein:

...it was a brilliant curatorial idea to devote an exhibition to them. One of the remarkable things about this exhibition...is...by the end you are convinced that these creatures should find permanent dwelling places in such halls, not because they are real but because they allow us to glean something about how humanity struggles to make sense of the natural world. Adrienne Mayor, a visiting scholar in the history of science at Stanford University, explains in an accompanying video how she studied maps where the Greeks claimed to have found the remains of fallen giants and discovered that they coincided with maps of major paleontological finds...The Greeks might have found bones belonging to ancient mastodons and mammoths, which were clearly far larger than human remains but also bore a close resemblance to them...As for the cyclops, such one-eyed giants were said to live in Sicily, where the fossilized remains of ancient elephants have been found. The cast of one Sicilian skull is on display; it contains an enormous central hole where the elephant’s trunk was attached. For the Greeks, more than two millenniums ago, that might have been an imagined creature’s single eye socket. What is left unmentioned here, but still haunts, is the human persistence in creating such creatures. Out of the unknown, out of worlds barely understood, out of glimpses of flesh or bone, in one culture after another, humanity has imagined beings whose bodies are mutant composites of incompatible animals...who violate every taboo and disrupt every sense of natural order. They arise out of our imaginings, offering seductive promises and irresistible dangers, as if they were resurrected fossils from a primal human past demanding tribute — which this fascinating exhibition begins to provide...

How true! Mythical creatures have a great deal to teach us, as this exhibit well demonstrates. After the exhibit closes in January, it moves to other museums: the Field Museum in Chicago, the Canadian Museum of Civilization in Gatineau, the Australian National Maritime Museum in Sydney and the Fernbank Museum of Natural History in Atlanta.
Posted by genexs at 9:33 PM