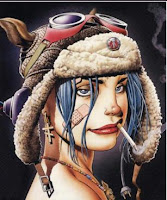 ...A recent controversy surrounding a substitute teacher called on the carpet for sporting blue hair and a nose piercing begs an explanation...Jennifer Harmon, after nearly a week of teaching at Vivian Elementary/Middle School, was told by the principal that her blue hair was unacceptable...

Blue hair and a nose piercing! I'm so jealous--I never had Tank Girl for a teacher. Then again, I never would have gotten anything done as I'd be fantasizing about her all day. But it gets better:

...another substitute teacher asked Harmon if she was Wiccan...

Didn't you know Wicca was going to raise its ugly head any second?

...Harmon denied being Wiccan, (she) was called into the principal's office, where she was questioned not only about whether she discussed religion with students but also about her appearance...

Sorry kids, your cool teacher gets fired! I guess bringing a baseball bat to class doesn't cut it! Who'd of thunk?

Maybe I don't get it, but isn't it supposed to be a free-religion society? What does wheter she is Wiccan or not have to do with the principal and the issue?

Thanks for a cool blog!

That right got ripped up with the rest of them, I suppose. Then again, if you are a Xtain, you have the right to force feed your religion down the throat of anyone who can't run fast enough. I know a teacher who nearly got fired because she had a pic of John Lennon in her classroom. Thanx for stopping by and your kind comments on my little blog.