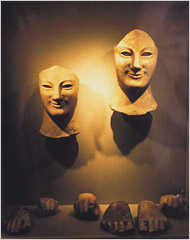 It's always good hearing about the repatriation of treasured antiquities:

...The University of Virginia plans to return two ancient Greek sculptures to Italy nearly three decades after tomb raiders looted them from Sicily...The acroliths of the Greek goddesses were created about 525 B.C. out of cloth, wood and marble...The life-size statues were originally displayed inside a temple in Morgantina, an ancient Greek settlement near what is now the Italian city of Aidone. They are thought to represent Demeter, the Greek goddess of agriculture and grain, and her daughter Persephone, the queen of the underworld...

According to U.Va. art history professor Malcolm Bell, the return of the acroliths is especially appropriate because:

...the myths of Demeter and Persephone involved themes of traveling and returning. After Persephone is kidnapped and taken to the underworld, her mother searches for her across the Earth. Meanwhile, Persephone returns to Earth once a year, heralding spring and rebirth...

The Goddess must be very pleased! Additional article here.