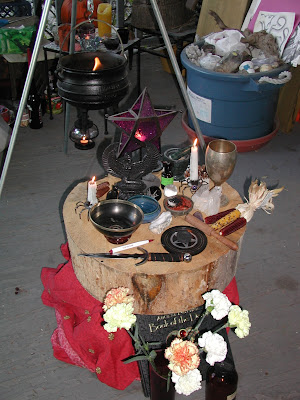 Isis looks on, along with her friend Bast who seems to be studying her reflection in the water. The God is a pine cone collected from under a tree at 'The Witch House' in Salem, Mass. Under it rests a pic of friend who has moved onto SummerIsle. The cauldron in the back, sporting flames to burn intentions, is supported by a tripod I made. (You can see the candle for the Southern Quarter under it--I like to face South, with North holding court over my shoulder.) My new athame is prominently in place, freshly dedicated with consecration oil prepared special for this ritual. The table is a spare 'pine round', volunteering for ritual use instead of its usual role as target for knife throwing.
Posted by genexs at 8:47 PM