Back from Salem II: Houses that Drip Blood 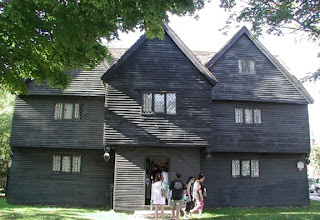 The 'Must Sees' of Salem:

The Witch House: This is the only standing building directly tied to the "Salem Witch Hysteria" still in Salem. The house belonged to Magistrate (Judge) James Corwin, a major player in the events of 1691/92. (His wife, Elizabeth, was accused at one point but the charge was never taken seriously.) The building is beautiful and the interior fascinating. Since this is an officially registered historic site, the tour guides are well prepared. Of course, as with many such exhibits in Salem, your visit ends when you are plopped down into a gift shop. Some are better than others, but the Witch House gift shop--although small--is well stocked with carefully selected items. Most are relevant to the time period of the trials. There's also a good selection of books and music. Coming home with one of their hand made tin lanterns or metal candle holders is worth the price of admission alone.

The House of the Seven Gables: This is the house made famous by author Nathaniel Hawthorne. Hawthorne was friendly with the family that owned the house and he spent much time there. It became the inspiration for his famous novel "The House of the Seven Gables". (Johnathan Hathorne, a relative of Nathaniel, presided over--rather zealously--the Salem Witch trials. This fact so much embarrassed and shamed Nathaniel that he added a 'w' to his last name in order to distance himself from his family.)

Witch Dungeon Museum: An interesting two part exhibit. First you are lead through a reconstruction of the jail used to house many of the accused. The cells are hideously small, sometimes a dozen prisoners being crammed into a room the size of the bathroom for a studio apartment. It's no wonder some prisoners died in custody. Conditions were hot and filthy, people having to endure there for months. Next you are lead into a theater where a portion of one of the trials is reenacted. Although brief, the performance is riveting.

Hi Gene. I'm nominating you for an award on my tattoo blog.

Yeah. He was a great friend to Herman Melville. 'Hawthorne' is my coven name, btw. :)

As soon as I get my act together, I'm nominating you too! :)