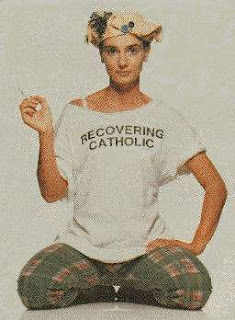 "...There’s a lot that’s beautiful about religion," she said. "It’s just you get some ... nutters that misinterpret it..." Islam "essentially at its core is a very beautiful religion," she said. "You’ve got a very small bunch of fruitcakes bringing that religion into disrepute. Same in the States, you’ve got people like George Bush bringing Christianity into disrepute..."

It figures that a woman with the vocal cords of an angel would come up with something like this. I've always been mesmerized by her voice. I think she'd reduce me to a quivering blob of jelly, just reading the lunch specials in some greasy spoon diner.
Posted by genexs at 7:10 PM

i'm right there with you. Can't wait to hear this. Universal Mother drops me to my knees.

Me too. I'd love to see her perform live. Then again, I might wind up depersonalized, collapse in the fetal position, weeping at her feet.