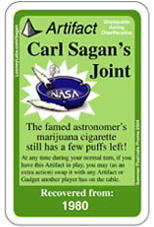 "...My best friend Sasha's dad was Carl Sagan, the astronomer. He was the biggest pot smoker in the world and he was a genius."

Wow! Something like a quote right out of Cheech and Chong, "Carl Sagan smoked pot, and HE'S NOT SO STUPID!". Good old Carl influences the world in so many ways.
Posted by genexs at 11:38 AM

Carl Sagan was a pothead! For real?! I've read several of his books and didn't even guess. I must be slipping.

Heh, well, I always thought some of the things he wrote and said in the earlier years were a dead givaway! Recently his estate and wife issued official statements about this. Check out Toomanytribbles' blog for her Sagan posts, as she's covered it. She's listed under my Coveners links. Sagan often butted heads with the 'establishment'. It was wise of him to keep mum on his pot smoking, as it would have been just one more thing they would have attacked him over.

Thanx for your comments, Livia.