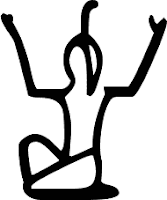 I saw this gem at HuffingtonPost (direct link):
.
DOBSON POINTS TO CULTURE WAR DEFEAT.... James Dobson delivered a farewell speech to the Focus on the Family staff, and conceded that the culture war he helped start hasn't turned out well for the agents of intolerance. Indeed, Dobson almost sounded resigned to defeat...James Dobson, 72, who resigned recently as head of Focus on the Family -- one of the largest Christian groups in the country -- and once denounced the Harry Potter books as witchcraft, acknowledged the dramatic reverse for the religious Right in a farewell speech to staff...

"...We are awash in evil and the battle is still to be waged. We are right now in the most discouraging period of that long conflict. Humanly speaking, we can say we have lost all those battles."

The hieroglyph above is "Rejoice, exalt, support". In other words, 'Weeeeee!"
Posted by genexs at 1:33 PM

Well, I'm glad that maybe now we'll be rid of his bullshit. But I'm also quite sure that other master bullshitters will take up the cause.